Production of any sports event is highly pressured. Every millisecond of a match needs to be analysed perfectly to ensure a pitch-perfect viewing experience for millions of fans watching all across the country. Combine this intensity with important and necessary government regulations around social distancing due to the Covid-19 pandemic and anyone can imagine the anxiety many broadcasters were feeling as the prospect of live sport returned after a three-month hiatus.

This is because - before the world changed as we knew it back in March - it was the tried and tested model that a large team of broadcast experts would be at the stadium. It had and (so we thought) would always be that the highest level of sports broadcasting would see an experienced team together in a room, working through every tackle and every goal.

However, the idea of a remote production model as a concept for live sports broadcasting of major, high-audience, premium events had long been mooted by broadcasters, with use cases already in play for certain levels of sporting events, such as the Vanarama National Football League and the Women’s Super League, here in the UK. The only piece of the puzzle missing was the compelling reasoning for broadcasters to move to using this model more widely.

Enter Covid-19. With physical production now a logistical challenge due to social distancing, combined with audiences seeking more content than ever, the growth of remote production simply had to accelerate dramatically. Through complete coincidence and unbeknownst to us at the start of the year, we had been developing a solution that could quickly and efficiently be set up to enable remote production in a seamless way, thousands of miles away from a sporting venue, which would prove instrumental. It simply was the case that these plans, backed by our high-bandwidth networks, suddenly needed to be implemented – and fast.

It started in Toronto

This had taken place through conversation and collaboration with EMG UK company Telegenic about how best to produce the games of rugby league for the Toronto Wolfpack. The complexities around Wolfpack games were unique. At the time, the club - although based 3,000 miles from the UK - were playing in the English Championship and vying for promotion to Super League. The question faced was ‘is it financially feasible for an entire team to fly out to produce each of their home games, every time they play, especially if they made it into the top tier?’ The answer was quite simply that is was not, which is where the unusual concept of producing their games from a location in the UK was born.

Using BTs high bandwidth connectivity, our team set about conceiving and implementing the concept of the ROC (The Remote Operations Centre) – in essence, a remote production facility on wheels. Once inside it, a crew would be able to cut, edit, produce and stream the games taking place at the Wolfpack’s home, Lamport Stadium, in exactly the same way they would if they were at the ground. 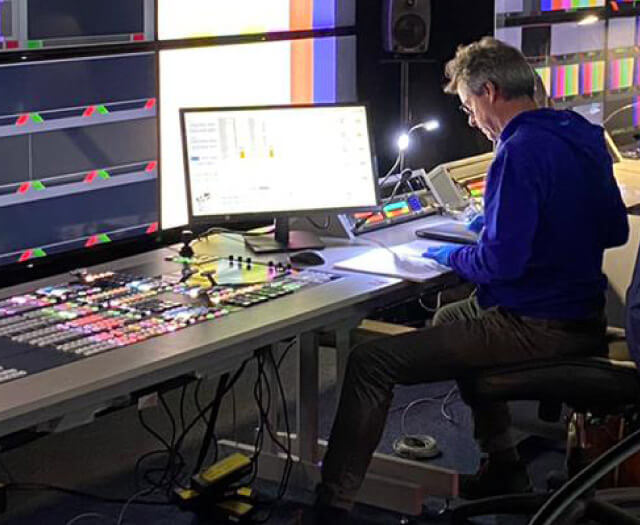 We were then faced with Covid-19, which quickly meant live sport halted and despite the hard work that had gone into making the ROC a possibility, in High Wycombe the galleries were born. It would not and could not be used for the very purpose it had been set up to do. But it’s always worth remembering, the world does work in mysterious ways.

The countdown to Project Restart

Fast forward three months and the establishment of the ‘new normal’, which meant the race was on to get live sport up and running. At the forefront of this mission sat the most watched and most valuable sporting entity in the world: The Premier League. With three weeks to work out a plan of how to produce the fast-paced flurry of remaining games in the 2019/20 season, it soon started to become clear, the ROC would have an even more important place in the evolution of remote production than anyone could have imagined.

Crucially, the decision had been made when the idea of the ROC was formulated to increase the existing (Tier 1) fibre connectivity to BT Tower and our second London switching centre from 1+1 Gbps to 10 + 10 Gbps. This ensured that the necessary bandwidth and resiliency was in place to future-proof the concept of the ROC.

With this in mind, in partnership with Telegenic, we set about initialising different options of delivering remote production, with the necessity of reducing the number of people onsite due to social distancing requirements, but still delivering the high quality UHD/HDR facilities required.

The decision was also made to repurpose Telegenic’s original building at Unit 4 in High Wycombe. The current capacity of BT’s diverse 10Gbps fibre network, could handle 48 circuits, but the remote surface production solution implemented was able to remove the entire production and EVS teams off site into the ROC with its socially distanced working stations – something that couldn’t be achieved in a single truck. Due to the decision to have all the Premier League teams play at home instead of neutral venues, this option was deemed the safest and most sustainable available to the mini crews on site. This was enhanced by our existing high-capacity network connectivity to a vast number of Premier League stadiums, meaning the requisite connectivity was in place to support ROC production methods. It also meant productions could be delivered remotely without compromising the format or level of cameras, retaining just two frames of latency.

Throughout the return of the Premier League, BT’s infrastructure enabled every broadcaster with rights to show the games and produce their respective matches in some shape or form. It was a huge step in the journey to a new way of producing live sport, using whatever route suited best – be that rapid deployment data solutions, remotely controlled methodology or fully managed vision delivery.

The success of Project Restart has shown that remote production is a viable part of sport broadcasting’s future and other sports such as rugby are going to be using the same methodology as their seasons re-commence. The uninterrupted broadcast, along with the strong picture and sound quality this method produced, presents huge opportunity for a shift change in how sports broadcaster operate in the future.

Remote production has revolutionised the entire broadcast industry in a matter of weeks. The changes have been so successful that there is very little chance of live broadcasters returning to mass onsite production. Increasing efficiency, reducing the carbon footprint of broadcasting and becoming more streamlined and sustainable as an industry has always been on the agenda, but Covid-19 has accelerated this becoming a reality.

Due to the resiliency, optimal design and widespread international presence of BT’s media and broadcast network, alongside the expertise of Telegenic, we’ve seen that remote production delivers just as high-quality broadcasting as on-site productions. And with the constant evolution of technology, it could even improve on them as we face up to the future of the broadcast industry.

2020 has sprung many challenges on the industry, but progress in the area of sustainability provides some hope that we can adapt. Transport is responsible for nearly 30 percent of the EU’s total CO2 emissions, of which 72 percent is road. What does this mean for the future of outside broadcasting which heavily relies on production trucks travelling miles up and down the country to deliver the live content that viewers crave? The last few months have shown us that sustainable broadcasting is possible with Project Restart simply being the catalyst to accelerate the trend towards remote production. Combined with the desire for more streamlined operational efficiencies and a nimbler way of working, is this the new normal or quite simply, the next phase in outside broadcasting?